It’s Time for Mayor Kenney to Publicly Commit to #AbolishTheSRC 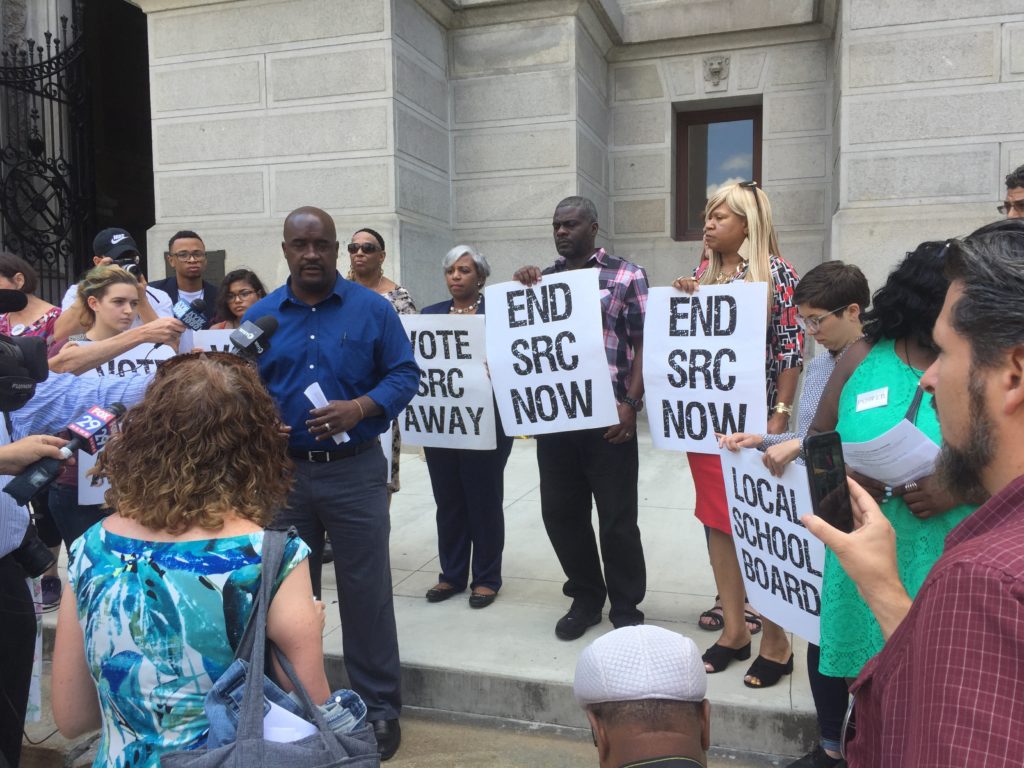 PHILADELPHIA — On Wednesday, August 9th at noon, members of the Our City Our Schools coalition held a press conference, calling on Mayor Kenney, Governor Wolf and SRC Commissioners to call the vote to abolish the School Reform Commission this coming Fall 2017. Two weeks ago, members of the coalition met with Jim Engler and Otis Hackney from the Mayor’s Office and asked for a public commitment to sign on to the Our City Our Schools timeline that calls for abolition of the SRC by the Fall of 2017. The Mayor’s office has yet to respond to the demand. Throughout the summer, the Our City Our Schools coalition also met with SRC Commissioners Wilkerson, McGinley and Richman, who expressed support. However, Chair Wilkerson has yet to put abolishing the SRC on a meeting agenda.

Below are quotes from speakers at today’s press conference:

“The SRC has failed our children. It has been a 15-year failed experiment, and it needs to end today. We need the vote to abolish by the Fall of 2017 to ensure that local control takes effect by the Fall of 2018. We can’t risk our schools being under state control if a Republican Governor wins in November 2018. We remember the school closures and budget cuts under Tom Corbett and we won’t risk that every again. We can’t afford to fail our children with this experiment. Our kids deserve better, our educators deserve better, parents deserve better. Let’s end it now.” — Antione Little, 215 People’s Alliance and chair of the Our City Our Schools campaign

“Mayor Kenney has shown that he cares about the 3 and 4 year old children of Philadelphia with the implementation of the soda tax, but that commitment must now be extended to all children by returning schools to local control. Mayor Kenney and Governor Wolf should uphold their pledge to abolish the School Reform Commission through a simple majority of the School Reform Commissioners, that they both appointed. Time is of the essence. We urge you to act now.” — Marguerite Stanford, Secretary-Treasurer of District 1199C, National Union of Hospital and Health Care Employees

“16 years is enough time make an informed decision that the School Reform Commission has done everything but reform. We do not have another year to wait. Governor Wolf, Mayor Jim Kenney, City Council, parents and children of the District demand the dissolution of the SRC by this calendar year’s end.” — Ethelind Baylor, Vice President of AFSCME DC 47

“Local control is an important matter. The people of Philadelphia know our city and our children — we’re the best teachers of our children. We encourage the Mayor to create a school transition taskforce made up of all the people who care about our schools — teachers, parents, administrators. We ask this taskforce listen to the residents of Philadelphia. What should our schools look like? Mayor Kenney, you promised local control when you ran. We’re holding you to your word. Let’s do this.” — Sheila Armstrong, education organizer with Philadelphians Organized to Witness Empower and Rebuild (POWER)

“With a Gubernatorial election looming in November 2018, our schools must be back to local control by the Fall of 2018 to avoid the risk of our schools being open to drastic state budget cuts. The SRC must vote to abolish by Fall of 2017 this year so that we get our schools back by the Fall of 2018. Residents of the city need to be involved in this process to change the undemocratic way our schools have been run for decades.” — Sara Arment, Reclaim Philadelphia

“Mayor Jim Kenney ran on a education and local control-based platform, promising the people of Philadelphia he supported local control and would work for it. Jim Kenney has failed to uphold his campaigning promises by not providing a timeline or even a response regarding the timeline. We ask for a public statement in support of abolishing the SRC this Fall.”– Luke Risher and Elani Gonzalez-Ortiz from UrbEd, a youth group fighting for public education

“We are here today to demand the SRC be abolished immediately. We no longer have the convenience to wait. With Trump in office and Betsy Devos as the education secretary, our future is now in the balance. If a Governor that overtakes Tom Wolf, we will no longer have leverage to vote for local control. Mayor Kenney, we’re going to be standing in solidarity together to demand the abolishment of the SRC this fall.” — Ismael Jimenez, co-chair of the Caucus of Working Educators, PFT member, and African-American history teacher